A head-start to global trade.

A tiny island called Cyprus, located in the Eastern Mediterranean Sea, created an attraction for many of history's conquerors. There are many reasons why Cyprus has been desired, conquered and colonised numerous times during its 10,000 years history. One of the reasons, is the island’s strategic position which attracted the interest of a succession of dominant powers in the region, who did battle for through the millennia. Cyprus is one of the most beautiful islands in the Mediterranean. It lies at the crossroads of three continents, occupying a key strategic position at the gateways of Europe, Asia and Africa. From as early as 2500 BC during the Bronze Age, Cyprus became the trading centre for where the East meets the West. The historical importance and the position of Cyprus outweighs its small size.

Cyprus joined the European Union in 2004 and became a eurozone member in 2008. In addition, Cyprus is considered as a southern European country due to historical and cultural ties. Because of its geographic location, Cyprus is of strategic importance for several powerful countries, inside and outside of Europe, giving the country more geopolitical value. Cyprus' location makes it an essential part of any security dynamic in the region. It is a critical component of NATO's Mediterranean operations and would play a central role in the event of NATO intervention in the Levant. Moreover, the United Kingdom hosts two sovereign airbases with approximately 8,000 troops in the southern portion of the island. The U.S. sees Cyprus as critical for maintaining control of Mediterranean waters and securing the presence of the U.S. Navy's Sixth Fleet.

Despite being a country with a population of under a million, Cyprus is a developed business hub, but also one of Europe’s favourite holiday destination, offering a perfect balance between business and leisure. The Republic of Cyprus has steadily built itself into a thriving business centre over the decades. Thus, Cyprus is used as an international maritime centre since antiquity. There are five ports in Cyprus. The main ports are the Limassol and Larnaca port whereas the others are smaller. Although, Paphos, Pomos and Latsi port also accommodate people either for leisure or commerce.A lot of businesses use Cyprus as their hub because the island is considered one of the top global hubs for ship owing and ship management services. Cyprus is the largest third-party ship management centre in Europe and the largest crew management centre in the world. Furthermore, the island’s international ship register is the third largest in Europe and the 11th largest in the world. The marine time industry is one of Cyprus most successful export services with over 130 shipping companies. Additionally, there are two active International Airports in Cyprus. The two airports are based in Larnaca and Paphos respectively and for the first time, they have exceeded the 10 million passenger traffic in 2017. In conclusion, Cyprus is ideally suited for International Business Center and the perfect place for investors and business people. 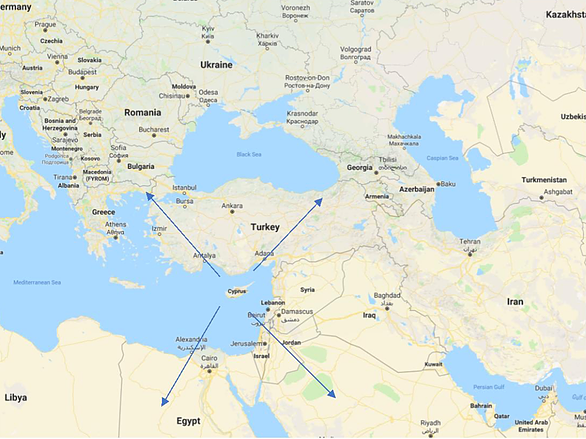 Flight Time from Cyprus to: