Some call it ‘Olivewood’ since the olive tree is a staple of the Cypriot landscape. This small Mediterranean island, populated with film lovers and with English spoken on every corner held its first international filming summit last week rightfully claiming a place on the map of the global film making scene, but first let us look at another, similar destination, who’s already done it.

Malta known to many as the Mediterranean’s mini-Hollywood has hosted sets for Game of Thrones and blockbusters such as the Gladiator and 13 Hours. Production companies setting up in Malta can access a range of financial incentives such as cash rebates starting at 22 percent, VAT refunds, low corporate tax rates and access to investment funds. Added perks such as paid flights and accommodation are granted by the Tourism Authority to productions representing the island directly. Malta also has co-production treaties with China and Canada and lucrative incentives for European cinematographic multilateral co-production.

Cyprus, a promising destination for filming is gaining traction.

Producing film in line with budgets whilst staying true to the creator’s vision is a win-win situation. Luckily Cyprus is a destination which offers majestic scenery to meet even the most insatiable of appetites, alongside tax benefits and cash rebates.

With over 326 days of sunshine, crystalline beaches and a very similar latitude to Malta and Los Angeles, Cyprus, could become the next natural filming studio of the Mediterranean, owing to ‘The Cyprus Film Scheme’ for attracting international filmmakers. At this point it serves to mention some of the island’s short-lived glory in the history of filmmaking especially in war films. In 1962, part of the Academy Award film ‘The Longest Day’, often regarded as the best war film of its time, starring John Wayne and Henry Fonda was shot in Cyprus. Another 1960’s film called Exodus, based on the original novel by Leon Uris and starring screen legend Paul Newman, was shot in both Cyprus and Israel, for which composer Ernest Gold won the Oscar for best original score. Unfortunately, due to the war in 1974 Cyprus’s momentum in the industry was lost, some argue that if the war didn’t take place Cyprus could have well been ahead of Malta.

With a rich history of inhabitation and cultural diversity, Cyprus can serve as a source of inspiration for creators. Dating back to the Neolithic age, Cyprus features several ancient ruin sites- the Greco-Roman city-kingdom of Kourion hosts a fully restored amphitheatre utilised for music and theatre performances today. In the city of Paphos, the Tombs of the Kings is a UNESCO world heritage site dating back to the Hellenistic and Roman periods. Mountaintops, picturesque villages and the backstreets of the capital’s old city are only some of Cyprus’s gems waiting to be captured for the silver screen. 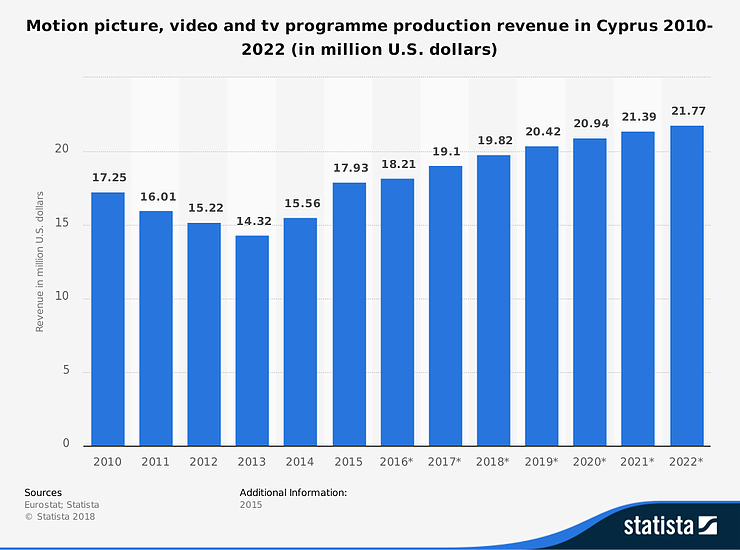 Steady growth in audiovisual production revenue, expected to rise with new incentives and tax relief, 2018
Cyprus has been providing a highly advantageous habitat for doing business to nationals and foreign investors for years which can also apply to the filming industry.
The Cyprus Film Commission consisting of the Ministry of Finance, the Cyprus Tourism Organisation, Ministry of Culture and Education and the national Foreign Direct Investment Promotion Agency are taking promising steps to make available to film producers the island’s highly advantageous tax and legal infrastructure. In the incentives package- which is still a working document- companies can select between a cash rebate or a tax credit, cash rebates start at 25 percent and can go up to 35 percent depending on the project’s cultural relevance. There is also tax allowance on investments in infrastructure. A prerequisite is registering a company in Cyprus- which also qualifies for VAT refunds. The Cypriot government is also open to supporting production that falls within the larger budgets depending on the project’s feasibility and economic contribution.

Cyprus Film Summit 2018
MillwoodKane representatives attended the 2018 Film Summit last week to find out more about the scheme, amongst the invited were delegates from European countries and other industry investors and producers of global standing from Russia, Asia, Middle East and North Africa, Los Angeles, Bollywood, Australia and Sweden.
Filmmaking is a game of knowledge, both for the producers and the host countries, and companies always look for new locations offering a combination of financial incentives, talent and facilities to meet the increasing demands of the industry, we at MillwoodKane International can serve as an independent advisor through our range of tailor-made services for producers looking for the best options available to them.
Share Share Share