Cyprus part of the Eden programme

EDEN-European Destinations of Excellence is part of the European Programme COSME, which is co-funded by the European Commission – Tourism Unit.

It is a programme with aspirations to promote development of tourism across Europe and concentrates on annual national competitions, with the main principal, of selecting a tourist ‘destination of excellence’ for each participating country.

Through the selection of destinations, EDEN effectually accomplishes the objective of focusing attention to the values, diversity and common features of European tourist destinations. In conjunction boosts the developing European destinations, creating a policy for circulating correct practices throughout Europe.

This European pursuit for excellence in tourism is based on an annual theme, selected by the European Commission in association with the national tourism bodies. The criteria of the selected destinations are responsibility to social, cultural and the environment, related to tourism. There are 25 EU countries and other candidate countries participating in this programme, aiming to award developing, unknown destinations.

EDEN-EUROPEAN DESTINATIONS OF EXCELLENCE IN CYPRUS the EDEN programme in Cyprus is managed by the Cyprus Tourism Organisation (CTO). Since 2007, CTO arranges the competition for the selection of the European Destination of Excellence according to the annual theme.

Some of the awarded destinations in Cyprus are:

EDEN ROUTE 1 is a mountainous exploration, crossing the beautiful Troodos range with picturesque villages and rich undergrowth. The starting point is the scenic region of Pitsilia, from the mountainous village of Palaichori, rich in history and culture, and includes several villages of the Districts of Lemesos (Limassol) and Lefkosia (Nicosia), on both the north and south part of the Troodos range.

EDEN ROUTE 2 combines the calmness of the Cypriot countryside with the history of wine, it can also be considered as a continuation of EDEN ROUTE 1. Commencing the tour from Foini, one of the most picturesque villages, built in a lush green environment at the base of Troodos. Foini was proclaimed second destination in “European Destinations of Excellence - EDEN 2010 Tourism and Regenerations of Physical Sites”. It is famous for its distinct pottery tradition, the traditional local wooden chairs and the crafting of the traditional Vourka tou Voskou (Shepherd’s backpack). Walk the alleys, appreciate the traditional houses built of brick and stone and square. 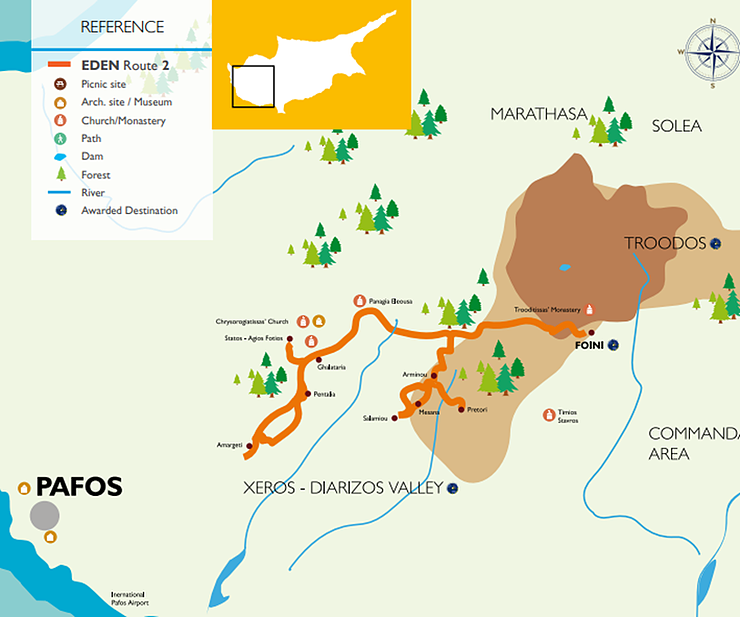 EDEN ROUTE 3 is one of the most attractive routes you may enjoy in Cyprus, as part of it is in an uninhabited section of the Paphos Forest. Paphos Forest is a Special Protection Area since 2005 and hunting is totally prohibited making it an ideal refuge for the wildlife of the island. Here one may meet the Cyprus mouflon (Ovis gmelini ophion), a rare species of a wild endemic sheep. NOTE: It is advised not to move in the Pafos forest at night. Especially during the winter months. 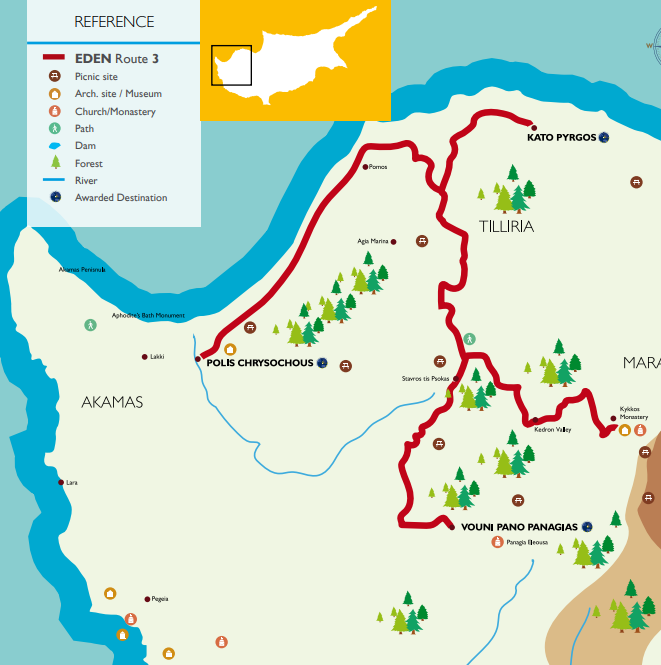