Today, we live in the freest, safest and most prosperous time in human history.

The engine that drives countries to thrive is economic freedom. With the advancement of economic freedom, poverty, sicknesses and ignorance are receding, while health care, education and environmental quality are flourishing.

Economic freedom is one of the most important factors to take into consideration when you are planning to invest in any country since it influences all aspects of a person’s life. Choosing to live in a country with a high level of economic freedom, such as Cyprus, means that the citizens will have the benefit of higher income, revenues and personal well being. This freedom is the fundamental right of every human to control his or her own property.

According to the 2018 Index of Economic freedom, Cyprus’s score is 67.8, which is well above the world average. Cyprus does particularly well in trade and monetary freedom. The transparent regulatory framework, the stability of the financial sector and the business infrastructure overall, contribute to a business-friendly environment. The government policies introduced do not interfere significantly with foreign investments, in contrast, foreign investment is encouraged. 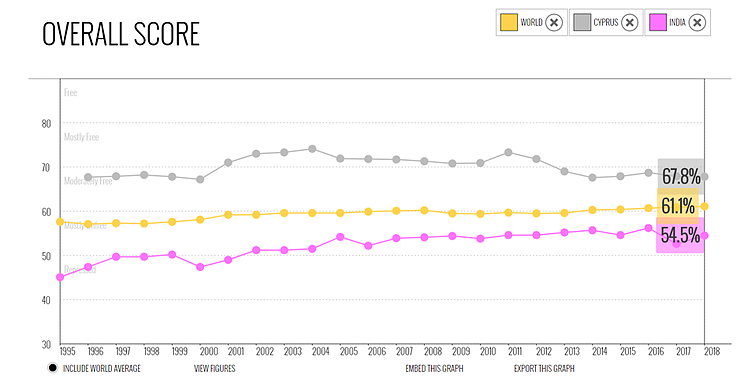 The economy of Cyprus is classified by the World Bank as high-income economy and is registered since 2001 in the International Monetary Fund list of advanced economies. Additionally, Cyprus has an advanced technological infrastructure and stands high in the Human Development Index rankings.

According to the annual global report in 2018 on political rights and civil liberties Cyprus scored 94 out of 100, scoring higher than India and the US which scored 77 and 86 respectively.

International migration for many people is a powerful instrument to improve their lives, thus moving to a well-developed country with an advance economic freedom will always benefit people and their future generations.