India’s President Lectures at the University of Cyprus

During the presidential visit by his excellency Shri Ram Nath Kovind to Cyprus in early September he held a lecture at the University of Cyprus on “Youth, technology and ideas: Shaping the contours of the 21st Century.” This event was made open to the public and encouraged students come and broaden their horizons on topics that affect them today. Speeches were also given by the Rector of the University, Constantinos Christophides, welcoming Shri Kovind to Cyprus and the university, as well as the High Commissioner of India, Dr. R. K. Raghavan.

Shri Kovind began by addressing the "very special ties” that India and Cyprus share, as well as the “warmth of the Cypriot people.” After discussing several bilateral agreements between the two nations on his second day of visit, these ties are stronger now than ever. With similarities between the Cypriot culture and the Indian culture the two countries “have the greatest respect for each others leader.”

Touching upon the subject of the University of Cyprus itself, Shri Kovind emphasised how it has “contributed significantly towards the pursuit of academic excellence and to the progress of Cyprus as a modern nation.” The university of Cyprus has been an established institution since 1989 and continues to provide students with first class education equipping them with the skills necessary to work anywhere in the world. With ongoing collaborations between the two nations the prospect for Indian students looking to study in a European University is heavily supported.

After the lecture, the bust of Rabindranath Tagore a Nobel Laureate in 1913 was unveiled. This unveiling was aimed to give students as well as the community the exposure to learn about the first non-European to win the Nobel prize in literature. Constantinos Christophides claimed in an introductory speech that the bust “will be a stimulus for discussion of literature, social sciences and the importance of culture in general.” 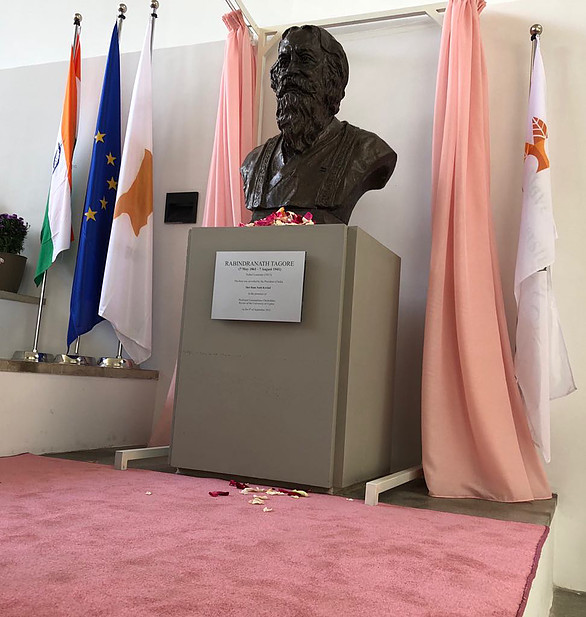 Rabindranath Tagore statue unveiled at the University of Nicosia, Cyprus

Shri Kovind also stated that “India and Cyprus have lived in harmony with nature for centuries. It is time for us to bring back our sustainable practices into our modern lives. New age technology combined with the wisdom of the past can solve many of our ecological problems.” Helping address India’s increasing energy needs as well as benefiting the nations economic development, Cyprus has expressed great support for the India-US Civil Nuclear agreement, as well as the International Energy Agency (IAEA). Not only do the two countries support each other in new age technology, but within the international ring, they tackle issues such as terrorism. Cyprus also supports India to be a permanent member of the expanded UN Security Council.

The Indian High Commission in Cyprus, has effectively promoted India in Cyprus, and contributes to the strengthening of political, economic as well as cultural relations. Through the events hosted for the three-day visit by the President, outstanding performances were given by many talented individuals aimed at sharing the Indian culture in Cyprus, further establishing our ties. Furthermore, with nearly 3,000 Indian citizens in Cyprus, the integration of both cultural aspects has played a significant role in consolidating the “friendship” as stated by Shri Kovind, between the two nations.